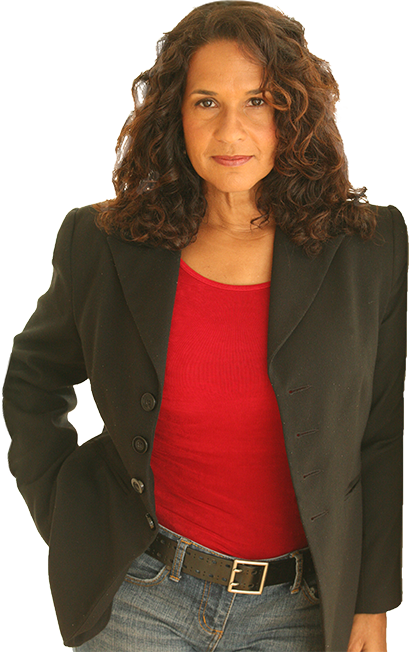 Maria Belen Gonzalez, “Maribel” Gonzalez is a first generation Cuban American actress who has worked in theater, television and films in both the Hispanic and American markets. Along with acting, her vast abilities include writing, directing as well as producing her own theatrical comedies for almost 24 years.

Born the only daughter of five in Miami, Florida to mother Consuelo Luque (her mother who she lovingly refers to as Cuscus) and renowned Cuban writer, Alberto Gonzalez, who after many years of successful radio shows and programming in Cuba and Puerto Rico put into practice his skill and experience and became a pioneer for Hispanic television in the United States. Her father also created a television channel with programming made by Cubans in Miami during the 70’s, Teleyara. There he made the first Spanish-language soap opera produced in the USA, entitled Santa Barbara.

Soon after she was born, the Gonzalez family moved to Puerto Rico where Maribel lived until the age of 17. She was hooked on performing, when after the age of six she made her first television debut. Growing up surrounded by talented entertainers had a great influence on Maribel’s desire to pursue acting as her career of choice.
Once the family moved back to Miami, Maribel completed her high school education in Miami Coral Park and within a short time made her professional stage debut in “La Vida de Rita Montaner (The Life of Rita Montaner).”
1990’s

During the decade that followed, she attended college and performed in many more Cuban exile inspired plays in Miami, including, “Papa Vino Por Tres Meses,”Cualquiera Que Suba Que Libere a Cuba” and “El Partido Se Partio.”
In 1992, however, Maribel entered thousands of homes via the small screen, in the hit Saturday Night show, Sabado Gigante, with Don Francisco in which she played the part of Isabelita in “La Familia Fernandez”. Maribel also appeared in Spanish Telenovelas such as “Marielena,” where she portrays a sultry, sexy lady and “Guadalupe,” in which she played a key role with equal success.

Within the same timeframe, Maribel appeared in a Miami theaterin a play called “En Los 90, Fidel Revienta (In the 90s, Fidel Explodes)”, which ran from 1990-1993 and received rave reviews from audiences with on-going sold-out shows.

As much as she enjoyed acting in Miami, in 1997 Maribel decided to heighten her career and follow her life-long dream by crossing over to the American market. As a result, Maribel landed a part in the first “Spiderman” movie, acted in an episode of Law & Order and the Law & Order TV movie, “Exiled.”

In 1998 Maribel stepped out of her comfort zone and was asked to write her own comedy, something that she never planned to do. She wrote, “Pase La Noche With Me Y Aprenda Ingles En One, Two, Three” (Spend The Night With Me and Learn English in One, Two, Three. …).”

This first play marked the beginning of her writing career. Maribel credits a great passion for her art and her father’s genes for discovering this hidden talent during the late 90’s. However, it was her mother’s unwavering support and experience as an actress and theater promoter herself that helped Maribel learn the ropes of the industry.

In 1999, she wrote and starred in both, “Que Confusión Habia When I Won La Loteria” (Such confusion when I won the lottery)” and after popular demand wrote the 2nd part to “Pase La Noche With Me Y Aprenda Ingles en One, Two, Three…”

The press would often ask why she’d write in both English and Spanish and she realized it was how most Hispanics spoke and how they could relate the most, while laughing at the cultural differences within the very same Hispanic communities.

“Que Confusion Habia When I Won La Loteria” This play was based on one of her most loved characters, Benita, a tom-boy who made it out of Cuba through the lottery that the Cuban regime created. Benita’s family who lived in New Jersey thought she had won the actual lottery and began to spend money uncontrollably as if she had believing that she’d give them part of her winnings later. When Benita realizes that her family preferred the fortune over her, she decides to move away and recognizing she lost the family that she never had.

Maribel was among 17 actors who made history by performing in the play “Bodas de Sangre”(Blood Wedding)” in both English and Spanish at La Jolla Playhouse in San Diego. She also worked in a play call “Miss Julie” with Actor/Director Jose Daniel Bort and in HB Studios she acted in “In Arabia, We Should All Be Kings”, both in New York City”.

In 2000 she also created, “I Can’t Believe Que Esto Me Suceda a Mi” (I Can’t Believe This Has Happened to Me!)” This play deals with the lengths we can go to fit in with society. Benita, the tomboy has to learn to act feminine and her gay roommate, Florencio Macho, a gay guy, has to act more manly in order to deceive his family into believing he’s straight.

“Are You Sure Que Te Atreves To Get Married for Papeles?” (Are You Sure You’ll Dare toGet Married for a Green Card)?” This play deals with the lengths immigrants will go through to become US residents and how disregarding the law can cause countless ordeals for the couples.

“Ay Niña Me Cai Will the Hospital Take Care of Me?” (Oh My I’ve Fallen, Will The Hospital Take Care of Me?)” This satire was inspired by a time when Maribel’s mother fell and they spent 18 hours in the hospital without being seeing. After such a long wait, her mother felt a little better and they ended up leaving. This unfortunate reality is experienced by too many in this day in age and Maribel brought some healing to the situation with the laughter she created from it.

“What a Nightmare Estoy Teniendo With The Roommates Con Que Estoy Viviendo” (I’m Living in A Nightmare with the Roommates I have)” is based on the challenges that come up when people can’t afford to live on their own and choose to share living space. The characters are 3 women and a man. An actress who always practices her lines out loud, whether there’s company or not, a woman who would talk on the phone for hours on the living room couch where she also slept, the other one was obsessed with the thought that someone was always going in her room and stealing her things when she wasn’t home and the man was a single bachelor who’s girlfriends would break up with him every time he’d bring them over because of their jealousy.

The title of “Si No Me Pagas Child Support, Nos Vemos En La Court” (If You Don’t Pay Me Child Support, I’ll Have to See You In Court)” says it all. The staggering numbers of single mothers living without the support of fathers is astounding and drove Maribel to write about this with the hopes that she could make a difference, even if in a small way to bring awareness of how important financial as well as emotional support is for children and the mothers who are raising them.

This was the first year that Maribel started taking her comedies to Miami and it was also that year that her mother was diagnosed with Cancer. From the beginning Maribel was involved with her mother’s treatment and care. Although the cancer is terminal, she has survived for almost six years and continues to support her daughter’s career as much as she can.

She wrote “Why Because Porque I’m Under Tanto Estress?” (Why Am I Under So Much Stress?) in order to release the stress associated with the harsh realities that came with facing this disease. The play is about a man who was recently divorced and goes through several avenues to distress when he decides to attend a stress release workshop where he finds his ex-wife is also attending, only adding additional stress to his condition.

In 2006 Maribel celebrated her 10th show with “El Titulo De Este Play Es 10 Años En One Day” (The Title Of This Play Is 10 Years in One Day).” This compilation of all of the shows she had done and that day, she was honored when the Mayor of Union City, Brian Stack proclaimed October 14th 2006, Maribel Gonzalez Day.

“Diet, Politics y La Economia, I’m Going Crazy Todo El Dia” (Diet, Politics and the Economy, I’m Going Crazy Every Day).” This look at the influences that American society puts on us from dieting, to financial responsibilities and political partisan positions.It was a wonderful way for Maribel to put a touch of her own opinions into the show through Rico Ramirez, a character who risks it all to join a pyramid scheme.

“What’s Happening En El Timbeque Con Jose, Benita y Pepe?” ( What’s Happening in the Timbeque with Jose, Benita and Pepe?” This comedy is based on the personal lives of three daily show journalists. Benita is studying for her citizenship test, Jose has been trying to get rid of his house guests who have over stayed their welcome and Pepe Susy is convinced that his sister’s boyfriend is just as gay as he is.

“You Are Going Out Con 3 Mujeres, Y Que Tu Wifee No Se Entere” (You’re Going Out with 3 Women, and Your Wife better Not Find Out)” They say that every cloud has a silver lining and Maribel certainly has a way to bring humor and light into any situation. Her latest comedy was inspired out of her own personal experience. From a personal betrayal, she was able to learn a great lesson in self-love and in turn created what has been referred to as her best work yet. This play is based on Defino, a man who is in love with his wife, the neighbor, a “phone” friend and the secretary. Most certainly an “LOL” comedy that audiences no matter the background, will get to experience in Miami for two nights only, February 19th and 20th, 2011.

To date, Maribel continues to write, produce and act and will be celebrating her 15th show anniversary in New Jersey on October 15th.
Accents and dialects

As all of her shows, Maribel focus on the human capacity to cope with life’s challenges and the ability to persevere. “It is my intention to make a difference in our world to help heal the soul through laughter and faith”

On October 14th, 2006, Maribel Gonzalez celebrated her 10th show in Park theater and was recognized for the many years of laughter she had brought to the community of Union City. Mayor Brian P. Stack proclaimed the day, "Maribel González Day," a very special moment for her.